And in many ways this is highly admirable; Cholerics get things done.  So what’s the downside? The route to accomplishing their end often runs right over others in their path.  A person who is perceived as an obstacle or barrier is not to be avoided but gone directly over or through. Secondly, a Choleric’s focus will change over time.  You may feel honored to have their complete focus at a certain point in time but feel slighted when that focus shifts to the next goal or obstacle to be conquered.

Remembering that we’re discussing a hypothetical “pure” Choleric, it should be obvious that most Cholerics don’t literally bowl people over physically – most of them can at least function in society on a daily basis.

The second major characteristic of a “pure” Choleric is an absolute assurance that they are right in whatever they believe.  Once convinced of something, a Choleric will not change how they feel or believe – even in the face of contradictory evidence.

Because of these two inborn traits, Cholerics are often loners; they prefer to work alone instead of having to put up with the weaknesses and shortcomings of others.  Additionally, because of these traits, a Choleric is most likely to hold a grudge when they feel they have been wronged.

A drive to accomplish ends plus an internal assurance of the rightness of their point of view makes them hold onto anger for long periods of time.  This trait is rarely expressed as outward rage but as a smoldering anger that will often be expressed in sarcasm, argument, or even revenge.

So a “pure” Choleric is a force of nature; driven by their own internal compass.

One thought on “Choleric – Driver” 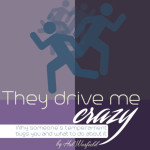